The Presbyterian Church according to some historians is the first church identified with the history of Highland County. The church, known as Nazareth, was organized by settlers on Clear Creek sometime between 1804 and 1807. The exact date is unknown. 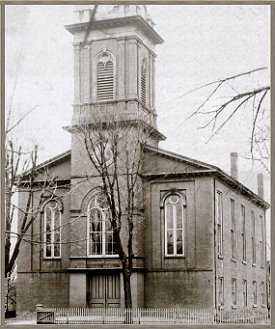 The first church building was a rough log structure, approximately 16 feet by 34 feet constructed about 1810 in a sugar grove on Clear Creek north of the junction of U.S. Route 50 and Petersburg Pike. The first pastor was Rev. Nicholas Pittenger. During Pittenger's pastorate, a new brick church was built on the edge of town where the Main Primary center now stands. The name Nazareth was given up and the church became known as The Presbyterian Church of Hillsboro, Ohio

Our third church home was constructed in 1831 on a lot on the south east corner of Main and East Streets. After just 15 years in use, this building was demolished and in 1846, a second church building was constructed on the site. It was in this edifice on December 23, 1873, that the women of the community, inspired by the speech of temperance lecturer Dr. Dio Lewis, met, planned and executed a successful Crusade to halt the sale of intoxicating liquor in Hillsboro. The movement spread throughout the country, Hillsboro thus gained fame as the cradle of the temperance movement and our church became known as "The Crusade Church".

It was therefore with great regret that the congregation recognized the need in 1894 to replace the historic structure with a more commodious building. The first block of the foundation of the present structure was laid on August 19, 1895 and on May 14, 1899 our beautiful Gothic style church was dedicated.

Now, in celebration, we repeat the words spoken one hundred years ago: "The house which we have been permitted to build through the gracious favor of Divine Providence we do now solemnly rededicate to the worship and the service of Almighty God, the Father, the Son, and the Holy Ghost. Amen"